Another 1% and other thoughts

Went on a run this morning. Being outside with nothing to do but put one foot in front of the other frees your mind to wander over all kinds of things.

So here are some thoughts from the morning:

1) Why do we allow the angry people to have such a disproportionate impact?

On my run, there was just one driver who leaned on his horn and waved his fist rather than allow another driver to merge onto the road in front of him - note: the merging driver was ahead of the angry driver. And there was another lane to the right of the angry driver. It would have been a simple matter for him to move to the right and allow the merging driver to come onto the road.

But look at this. That man's anger made such an impact that I have spent all this time on him!

2) The honeysuckle is blooming on the south side of the hedge along the trail. Beautiful scented morning!

3) The poison ivy is thriving too. Most of my life I was immune to this ivy, but in the past few years I have developed a horrible reaction to it. Too bad. It's a beautiful plant!

Just a few more weeks of this frenetic pace, and I should be able to relax a bit. This Friday is the opening reception in Vienna. This weekend I must begin installation at Artomatic (I have begun to produce the things I want to show there). Next week I take down the Winery. Then will come the Open Studios. 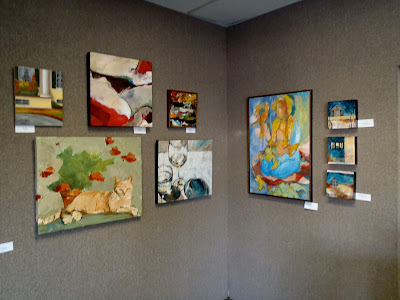 Walls at "Six Artists, Once Again"